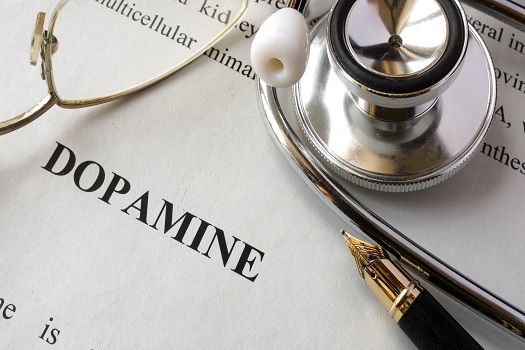 According to the Parkinson’s Foundation, approximately one million Americans have Parkinson’s disease, and more than 60,000 people are diagnosed with the condition every year. A decrease in the levels of a chemical known as dopamine is one of the leading causes of Parkinson’s. Here are some facts about this important chemical.

Dopamine is a chemical produced by the brain that serves as a neurotransmitter, sending signals from various parts of the brain to the rest of the body. Neurons in the areas of the brain known as the substantia nigra and basal ganglia are responsible for the production of dopamine. When these neurons die or are damaged, the amount of dopamine is reduced.

The Correlation between Parkinson’s & Dopamine

As levels of dopamine drop, your loved one may begin to have difficulty regulating movement. Most people begin to notice Parkinson’s-related motor symptoms when approximately 60 to 80 percent of the dopamine-producing neurons are affected. Typical motor symptoms of Parkinson’s disease include tremors and muscle rigidity.

Early diagnosis is critical because Parkinson’s disease can be particularly challenging in its final stages, and family caregivers can easily get overwhelmed. Caring for senior loved ones can be challenging for families who don’t have expertise or professional training in home care, but this challenge doesn’t have to be faced alone. Family caregivers can turn to Home Care Assistance for the help they need. We provide high-quality live-in and respite care as well as comprehensive Alzheimer’s, dementia, stroke, and Parkinson’s care.

Most medicines used to treat Parkinson’s disease either stimulate the production of dopamine or trick the brain into thinking it’s producing dopamine by acting on dopamine receptors. Levodopa, which is often used as the first treatment for Parkinson’s, produces dopamine when metabolized by the body. However, levodopa can lose its effectiveness rather quickly. Dopamine agonist drugs, such as rotigotine, pergolide, cabergoline, and bromocriptine, are also used to stimulate dopamine receptors in the brain.

Seniors in the later stages of Parkinson’s can live at home, but most need assistance from a family member or other caregiver to do so safely. Seniors living with serious health conditions often need extensive assistance in and outside the home. Home Care Assistance is a trusted provider of Oshkosh live-in care. Our caregivers are expertly trained to assist seniors with bathing, grooming, light housekeeping, and various other daily tasks, and we also offer specialized Alzheimer’s, dementia, stroke, and Parkinson’s care.

Omega-3 fatty acids, such as those found in oily fish, are also essential nutrients for virtually all tissues in the body. You should encourage your loved one to eat fatty fish, such as salmon, tuna, and mackerel, at least twice a week.

If your loved one has been diagnosed with Parkinson’s disease, he or she can benefit from having a professional caregiver help with everyday tasks. Families looking for top-rated Oshkosh at-home care providers can reach out to Home Care Assistance. From respite care to specialized Alzheimer’s, dementia, stroke, and Parkinson’s care, there are many ways we can make life easier for seniors and their loved ones. To hire a professionally trained caregiver for your loved one, call us at (920) 573-6295 today.