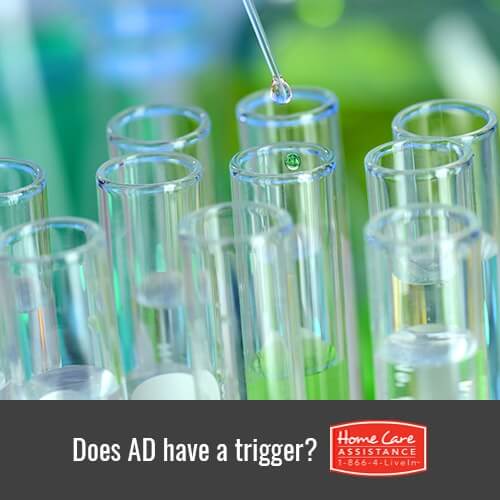 The age-related brain degeneration that occurs during Alzheimer’s disease can be extremely challenging for Oshkosh Alzheimer’s caregivers to witness. Though many researchers are working on discovering a cure for the condition, it is impossible to treat Alzheimer’s without understanding why it occurs in the first place. Some new research by scientists from the Lomonosov Moscow State University was recently published in a journal called Scientific Reports and lead researcher Vladimir Polshakov to share an exciting discovery about the possible trigger that may spur Alzheimer’s disease.

How Amyloid Plaques Cause Alzheimer’s

Beta amyloid peptides are a type of protein that typically resides in the membrane surrounding nerve cells of the brain. These proteins are supposed to protect the brain, but for some reason, as people age these proteins begin to stick together in clumps known as amyloid plaques. These clumps block the signals between individual synapses, and when the immune system tries to destroy the amyloid plaques, it ends up accidentally harming brain cells instead. The result of this damage manifests as the cognitive decline Oshkosh at-home caregivers witness while caring for seniors with Alzheimer’s and dementia.

The New Discovery That Causes Amyloid Plaques to Form

Using several experimental techniques including nuclear magnetic resonance, the researchers studied how amyloid plaques formed. When certain isomerized beta-amyloid peptides interacted with zinc ions, the researchers realized that the peptides began to rapidly bond with each other. After coming into contact with zinc ions, the forming amyloid plaques bonded so quickly that it was hard for the scientists to even see the plaques forming.

Hope for a Future Cure

Now that the scientists realize that zinc ions facilitate rapid peptide bonding, they are optimistic about the potential for a cure for Alzheimer’s disease. However, they emphasize that more research needs to be done to understand why it is only isomerized peptides that are affected by zinc. After more research, it may be possible for them to create a medication that will block zinc ions from creating amyloid plaques.

In the meantime, family caregivers have other resources to help take care of their loved ones with Alzheimer’s. Home Care Assistance in Oshkosh provides comprehensive Alzheimer’s home care designed to help seniors with Alzheimer’s manage the disease in the comfort of home. This includes safety monitoring, mobility support, personal care assistance, medication reminders, and so much more. We even supplement Alzheimer’s care with our proprietary Cognitive Therapeutics Method at no additional cost to help delay dementia symptoms, strengthen senior cognition, and boost self-esteem. Call a compassionate Care Manager today at (920) 216-6276 to learn more about Alzheimer’s home care and schedule a free in-home consultation.